Posted by KRITI TEAM
This page is an archive of media coverage of the work done by Kriti team.

"At a time when a majority of cultural content is generated keeping a directed lens towards entertainment and financial profit, Delhi based Kriti Film Club forgoes it all to ensure social development. The brainchild of 19-year old Kriti Team, a Non-Profit Organisation, the Film Club focuses on documentary cinema and social films to fuel the discussion around some of the most pressing concerns of our time, from casteism to climate change. We talk to...https://www.dssc.co/delhi/2018/01/10/kriti-film-club-development-support-group-not-project/

"RAHI's documentary film 'The Little Girls We Were... And The Women We Are' had its all-India premiere at the India Habitat Centre on 17th February, 2018 in collaboration with Kriti Film Club. 180 people attended the screening at Gulmohar Hall which was filled to capacity. The screening was followed by a panel discussion with Anuja Gupta and three of the survivors from the film who took questions from the audience about the issue." https://www.rahifoundation.org/the-little-girls.html (the film has won the Best Educational Film National Award 2018 on 13th April)

"An eclectic group of people gathers to watch a documentary on the Baiga of Madhya Pradesh who were evicted from their homes inside Kanha National Park. Some in the audience are students, others retirees. Some are activists, others simply there to enjoy the movie...https://www.business-standard.com/article/current-affairs/a-film-club-with-a-big-heart-117081200017_1.html

"Membership at these clubs isn’t expensive....and Kriti Film Club has a piggybank where people can put in any amount." https://www.telegraphindia.com/1161211/jsp/graphiti/story_123631.jsp

"An intimate space for watching and discussing documentary films..."  https://www.hindustantimes.com/art-and-culture/it-s-not-quite-a-fade-out-for-delhi-s-film-clubs/story-QhOTGcU6X5e6uYaYWnwE6L.html

"The idea is to get people to watch documentaries and understand human rights issues. We'd also like the mainstream audience to be able to interact with filmmakers and researchers about these issues...", http://indianexpress.com/article/cities/delhi/film-chic/

"A club dedicated to documentaries that evoke visions of change within their viewers, sounds like just the cup of tea our society needs right now. Not only do they specifically screen socially relevant documentaries, they also welcome independent filmmakers to screen their work, or offer to host a film festival in honor of the same. Besides, what better way to support a social movement, then by getting to the root cause of it through a film? While their focus remains on documentaries, they also attempt to maintain a discussion group so everyone, right from students, to academicians or professionals, can interact.

HG Loves: Their drive to use film as a medium to stir up action and change is inspiring. If you’ve got an idea for a documentary in the pipeline, you should get in touch..." https://homegrown.co.in/article/800962/delhi-movie-buffs-here-are-8-film-clubs-you-need-to-check-out

"We run the club on contributions and through borrowed home equipment." Started in September 2000, it has screened films like Harvesting Hunger by Krishnendu Bose, and Aadha Aasman by Samina Misra..." https://www.thehindubusinessline.com/todays-paper/tp-life/Young-and-calling-the-shots/article20301533.ece

"“We should walk an eco-footprint every day. After all, small steps change the world....” https://healthtopical.com/pick-week-changing-world-one-step-time/

"Dilliwalahs are spoilt for choice when it comes to exciting movie halls, expansive film festivals and eclectic film clubs. If you want to go to the flicks or find out more about Delhi’s favourite film festivals and film clubs, then read on..." http://delhiexpathub.com/movies-film-festivals-delhi/

On 22nd April, the Kriti team celebrated the Earth Day 2020 with an online festival, asking people to share their #stayathome expressions on the theme 'THE EARTH IN LOCKDOWN'. https://www.facebook.com/events/247470633040009/ This is a compilation of all the contributions received (one each from a person where multiple entries were made). With thanks and gratitude to everyone who joined and a pledge to make earth footprints each day...

Continuing the Kriti Film Club lockdown recommendations started in March (see https://krititeam.blogspot.com/2020/05/kriti-film-club-lockdown.html).
KRITI FILM CLUB invites you to watch a special daily curation during Lockdown 2020!
As the Covid19 lockdown keeps many of us home, its an opportunity to watch some insightful and thoughtprovoking cinema. The Kriti Film Club continued its lockdown recommendations through April and here is the collection, if you have not yet seen these films. Most of the documentaries recommended by us have been screened by the Kriti Film Club over the past two decades. Some others are being recommended in consultation with the filmmakers and/ or producers.  If any organisation requires curation and facilitation of documentary films please get in touch with us on space.kriti@gmail.com
Day 12 (1 April 2020): This one to respect our natural resources!
A DAM OLD STORY by Tarini Manchanda 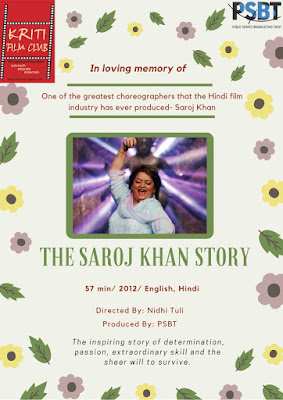 THE SAROJ KHAN STORY by Nidhi Tuli, produced by PSBT...

with a personal message from the director, Nidhi Tuli: "She was much bigger than what the film could capture but am so glad I had the opportunity and that time with her. She was full of stories, she grew up in films with films and all her references about her life were with respect to the film she was working on when something or the other happened in her life...she loved the industry but also knew there are no real friends in there...during the making of the film I really became fond of her and I don’t think she did of me...but we kept in touch and am grateful for that too...what a great spirit! A giant legend! Today marks the end of an era"
This documentary film is a story of Saroj Khan, one of the most prominent and legendary dance guru of Bollywood. It talks about Saroj Khan's career journey in Bollywood and her rela… 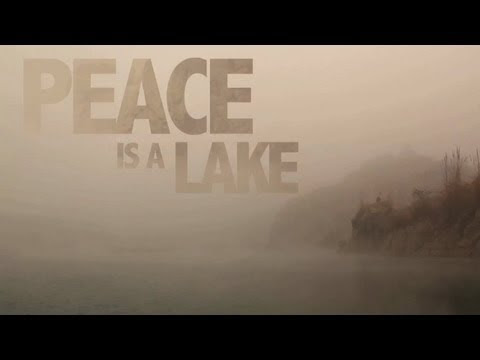 STAY AT HOME AND WATCH DOCUMENTARIES - Curated by KRITI FILM CLUB
The wind was blowing differently for a few days, the streets were getting emptier, the police was making its rounds and telling people to go back home. There was a lot of noise around…a virus was spreading and coming close home…many countries had started to go into lockdown…my city and yours too was facing restrictions to stay at home! A silence was becoming real but the noise within was still very loud…fear, anxiety, stress was taking over. The morning of 21st March 2020, I thought “why not share some films that calm, entertain, connect and distract people while they begin to stay home.” The first post with a Kriti Film Club lockdown recommendation got written thus...documentaries that we have screened over the past 20 years and some others of filmmakers who have screened with us! Kriti Film Club is an independent documentary screening initiative by the non-profit organisation, Kriti: a development praxis and communicati… 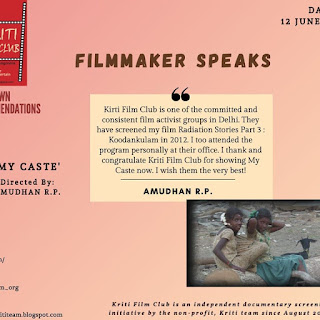 KAMLABAI by Reena Mohan
Available to watch here: https://vimeo.com/188487980
Password: reena Also catch Reena Mohan in a *conversation* at the Urban Lens Film Festival, Bengaluru with Shabani Hassanwalia here: https://www.youtube.com/watch?v=Ff94DvcxsBY And read an *interview* here: https://scroll.in/…/classic-documentary-kamlabai-is-a-begui…
To stay updated with daily Kriti Film Club Lockdown Recommendations you could like the following profiles or ask to be on a whats app group. https://www.facebook.com/kriti.team https://www.instagram.com/kritifilmclub/?hl=en
If you wish to support this non-funded initiative, please consider making a gift contribution here: