The KRITI Film Club has been screening documentary films at least once a month since the year 2000. We screen films on a range of issues connected with development, human rights and social attitudes/ trends. A neighbourhood film club that showcases films made by amateur and professional filmmakers, for young and old hands, for Indian, South-Asian and international films….it provides a space for brainstorming and sharing on these issues among different others.

This is an initiative of KRITI: a development praxis and communication team, a not-for-profit entity, based in New Delhi, with work across India.

The whole idea of the KRITI Film Club is to place thought-provoking cinema in a discussion group that will help to deepen understanding on social and development issues among viewers and film-makers. It is an attempt to create a forum where students, activists, academicians, development professionals, media professionals and friends can come together and interact, through meaningful cinema. It also helps increase access of these films to a larger audience beyond film festivals and special screenings, as we keep the films for sale at our workplace after their screening. Our efforts are also to make it a place of rendezvous and meeting new people, especially the ‘non-converted’.

From 2000 until 2010, we screened documentary and socially relevant mainstream films on the third Saturday evening of every month, at our workplace in New Delhi, and since 2010 have been organising monthly screenings at the India Habitat Centre (IHC). As far as possible, we invite the film maker to be present at the screening so that the audience interaction is insightful and useful. Screenings at our workplace (the original home of the Kriti Film Club) restarted in March 2018, alongwith IHC screenings. In 2019, we began Kriti Film Club screening in Mumbai too. We also organise screenings in schools and colleges of Delhi, curate and organise film screenings on request from development organisations and people’s movements, in solidarity and support for their work.

Our film club has and continues to inspire several individuals and organisations to start local neighbourhood film clubs in their communities of work, institutions and cities. You can see and access documentaries made by independent film makers, documentary producers and development organisations from across India and parts of the world from the KRITI Film Club. We have a collection of over 800 documentaries in our inhouse library and distribute a larger number. The distribution of documentaries is done in collaboration with the film makers. We have to thank the independent film makers’ fraternity for sharing and screening their films with us so that we have been able to reach these out to the civil society, students and general public.

Our film club is an independent effort and we don’t take any grants to keep it going. We run the KRITI Film Club on contributions by its diverse users and hope that you will support this effort so that it can be a self-sustaining endeavour. We believe that we are creating a collectively funded space this way! We want to remain such so that we practice what we preach in development action and communication! Support to the KRITI Film Club's gullak (collection box) is always welcome so we can make the screenings even better than they are now! We enjoy running this film club and look forward to expanding its outreach for filmmakers, photographers and viewers.

Come and connect with this space to Watch and Access Films on human rights…development…socially relevant themes.

If your are a film maker interested in screening with us or having us disseminate your films in collaboration, write to space.kriti@gmail.com with the subject “film screening interest”

The Plastic Cow by Kunal Vohra is a film on animal rights and looks at the impact of our almost complete dependence on plastic bags, which we use and discard carelessly everyday. Not only are these bags a huge environmental threat, they end-up in stomach of cows as they fend for themselves and forage for food in community garbage dumps. The film is also a comment on the religious hypocrisy of the cult of the holy cow. (3rd November 2012 at Kriti Film Club homespace - Filmmaker present)

A Drop of Sunshine by Aparna Sanyal talks about Schizophrenia. It takes us through the story of Reshma Valliappan, a 30-year old Indian woman, and charts out her journey of eventual triumph over her condition. (10th – 14th October 2014, Online viewing https://www.youtube.com/watch?v=dwKQ4J5b5nk&feature=youtu.be)

Three Characters in Search of a Forest by Krishnendu Bose is a story of Delhi's Ridge forest and it's struggle for survival, shared through the lives of three characters - Pradip Krishen, Ravi Agarwal and Ranjit Lal (4th June 2015 at Indian Social Institute, New Delhi - in collaboration with ICR). 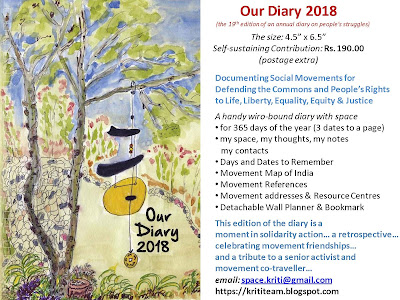 Click to enlarge! Order Form Our Diary 2018 The size:  4.5” x 6.5” Self-sustaining Contribution:   Rs. 190.00 Please add Postage and Packaging costs to above: Postage costs (all inclusive) In Delhi NCR Faridabad/ Gurgaon/Ghaziabad/ Noida All over India Single copy Rs.50.00 Rs.60.00 Rs.70. 00 Multiple copies Rs.40.00 per copy Rs.50.00 per copy Rs.60.00 per copy ·   The total amount should include postage costs as mentioned above. ·   Customised printing with organisational logo and text can be made at an additional contribution. ·   Small to large discounts are available for bulk orders over 100 diaries. ·   Please ask for South Asia/ International contribution, if required. ·   Our Diary is published independently based on orders and not funded by any donor since 2000. Name: Organisation: Address: Tel.: Email: No. of copies: Total Amount: Bank/ Branch: Cheque/ demand draft no./ money order: Date: 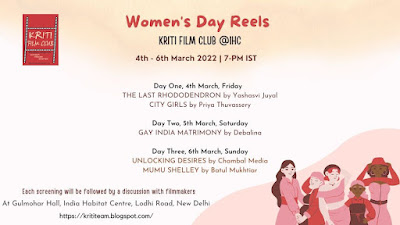 Kriti Film Club invites you to the first in-person screenings  and filmmaker conversations  in 2022 Celebrating Women's Day Month 4th - 6th March 2022, 7 pm Gulmohar Hall India Habitat Centre New Delhi  Please click on dates below, to register for the films you want to see! Day One : 4th March 2022 , 7 pm @IHC THE LAST RHODODENDRON (36:56/ Pahadi with English subtitles/ 2020/ Short Fiction)    Directed and Produced by Yashasvi Juyal About the Film: In a small village in the mountains of Uttarakhand, as a daughter is summoned by an urban promise, her mother is haunted by the possibility of a ghost village. This film 'narrates the journey of a conflict where one generation is connected to the possibilities of the city, and the other is tethered to the survival of their land. Festivals and Awards: Dharamshala International Film Festival (World premiere) Gender Sensitivity Award at the Dharamshala International Film Festival. About the Filmmaker: Yashasvi Juyal is a self taught 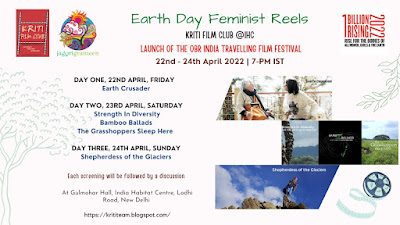 JOIN US FOR Earth Day Feminist Reels: Kriti Film Club@IHC in collaboration with One Billion Rising India and Jagori Grameen 22-24 April 2022, 7 pm onwards Gulmohar Hall,  India Habitat Centre (IHC),  Lodhi Road, New Delhi The films will be followed by a discussion with experts and citizens. SCHEDULE Day 1: 22nd April 2022, 7pm@IHC EARTH CRUSADER (55 mins./ English/ 2016/ India/ Documentary) Dir.Shabnam Sukhdev. Prod. Films Division. About the Film: Sustainability of an ideology through the mission and vision of Didi Contractor‘s mud architecture. About the Filmmaker: Shabnam Sukhdev is an award-winning filmmaker and educator with undergraduate degrees in Psychology and Sociology, and a B.Ed in Special Education. She pursued her interest in filmmaking by obtaining a 3-year post-graduate Diploma in Cinema from the Film and Television Institute of India, Pune. Discrimination and human rights issues concern her deeply and are reflected as recurring themes in her work. She believes that a 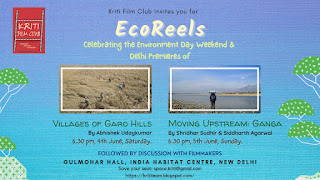 CELEBRATING WORLD ENVIRONMENT DAY EcoReels   by Kriti Film Club 6:30 PM IST, 4th-5th June 2022 Gulmohar Hall,  India Habitat Centre, New Delhi World Environment Day and Us June 5th is celebrated each year as World Environment Day . The theme for 2022 is Only One Earth , highlighting the need to live sustainably in harmony with nature by bringing transformative changes – through policies and our choices – towards cleaner, greener lifestyles. Join us to mark this day, with a pledge to safeguard our environment and earth. This World Environment Day weekend, Kriti Film Club is hosting the Delhi premiere’s of two Indian documentaries , that urge us to connect and live in harmony with the ecosystem around us, to treasure and conserve it, as well as to synergise our life choices, our livelihoods and our spiritual being with what is offered by nature and the earth. We hope that Delhi’s audience will not miss a chance to watch these films and make their ecofootprints to start the month of